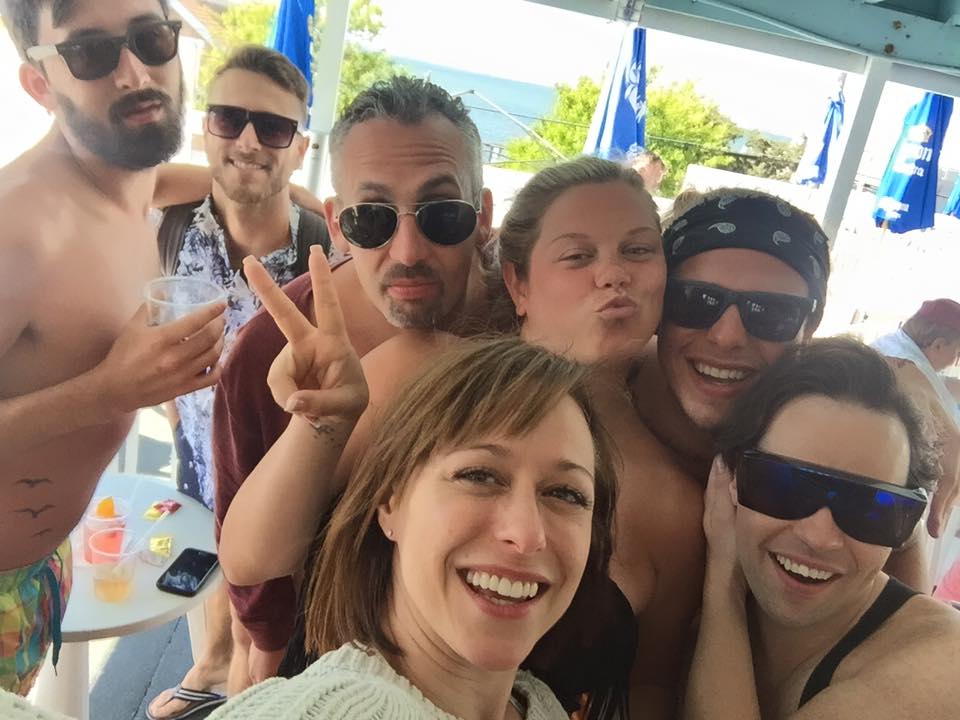 You guys know about Fire Island? It’s a vacation spot for many folks living in and around the New York metropolitan area. It’s a bit of trek to get there from the city. Not only is it a couple hours away via car or train, you can only complete your journey via ferry boat. No cars are allowed on the island. Pretty neat. It encourages a pedestrian community with wagons for carrying groceries. It’s beautiful out there. It’s peaceful. It’s worry-free. It’s idyllic. So the jaunt is totally worth it.

The island isn’t wide, quite the opposite, but it is very, very long. And along the coast are different harbors. Each harbor town has it’s own character and demographic. For instance, the Fair Harbor ferry will drop you in the land of families and retirees. Quiet, except for children’s laughter and screeches of fun or the occasional bark from a family dog. I’ve had two visits to this wonderful place. It is so lovely.

If you take the Sayville Ferry you’ll end up in Cherry Grove, one of two sister harbors including The Pines, that sprung up years ago as a mecca for the LGTB community. You don’t go there to be alone. You go to be a part of the fun, the activities, the brotherhood and sisterhood. The doors are open, there’s always something to do or someone to be with. There’s bingo and trivia and shows. It’s a little like being on a cruise; you’re just on an island instead. This past Monday I was in Cherry Grove for the first time.

It happened to be the day after the mass shooting in Orlando.

There was a palpable sense of camaraderie, a somber, but resolute energy in the air. But in Cherry Grove that is the case every day, not just the day after a tragedy. There is acceptance. As I went from home to home, pool to beach, boardwalk to restaurant, I could feel the hospitality, the welcoming nature, the embracing spirit. That’s the nature of the LGTB community.

As you can imagine there were many discussions erupting around tables and at bar stools. Somebody brought up an interview they saw where a panelist stormed off the stage because his fellow anchors refused to see the shooting as a hate crime. They insisted it was only terrorism. I’m dumbfounded as to why it simply isn’t thought of as both. Owen Jones said, “If [Omar] Mateen had walked into a synagogue and massacred dozens of Jewish people, you wouldn’t be saying what you’re saying now. You would be talking about it as an anti-semitic attack. This was a deliberate attack on LGBT people.” He added: “At the end of the day this was a homophobic hate crime, as well as terrorism and it has to be called out . . .” via Express UK

Something that people may not entirely grasp about the shooting in Orlando is that it didn’t just take the precious lives of those victims and forever alter the lives of their loved ones, but it also took from the LGTB community a place to feel safe. It ripped from them any sense that they could create a respite. Pulse wasn’t just a dance club, it was a place of harmony and peace for individuals that find themselves shunned everywhere else in society. It was their worry-free zone. The shooting attacked their sanctuary. I shudder at the notion of someone marring the sanctity of Cherry Grove.

Love doesn’t have to be taught. It doesn’t need to be learned. It is inherent from birth. It is beautiful. It is right. Why work so hard to undo something that is perfect just the way it is.